So I had the opportunity to take part in the ESRI Federal GIS User Conference this past week and I must say I come away with it with expanded views of the functionality of GIS. My role during the conference was as a Student Assistant. We assist the conference organizers with logistical operations as well as provide support for program sessions. 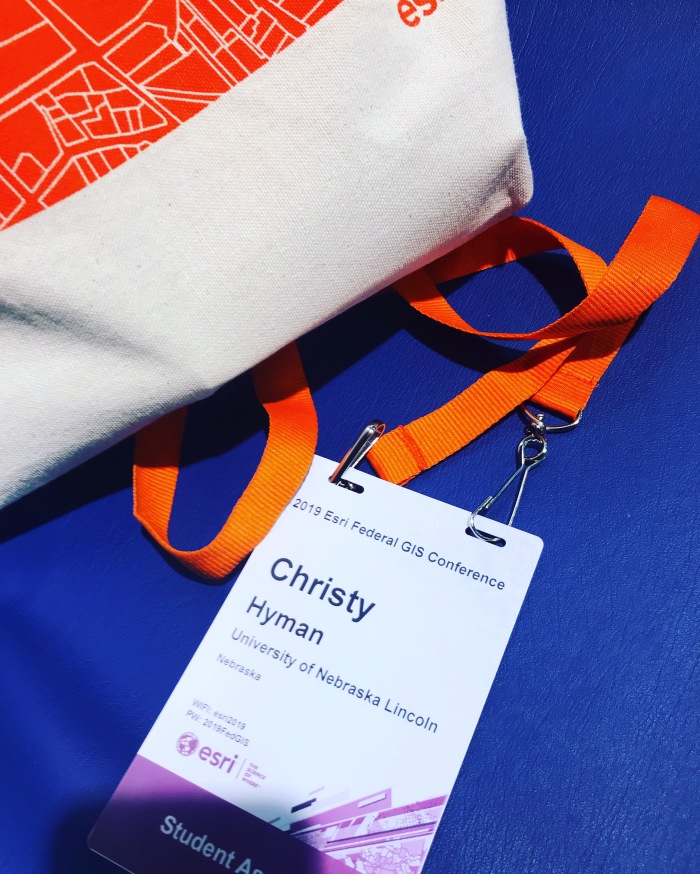 During my time helping out at registration, I was able to meet so many federal employees from around the DC area as well as organizations that partner with federal agencies. There were professionals from the World Bank, National Geospatial Intelligence Agency, Federal Bureau of Investigation, FEMA, Housing and Urban Development, the CIA and many more. The conference dates corresponded with the recently re-opened United States government which provided a greater level of urgency and self-awareness for the work the agencies collectively do.

The sessions provided ran the gamut with geospatial tools and best practices such as Python Intros, Spatial Data Mining, Geodatabases, and one that I was SO SAD to miss: Modeling Spatial Relationships: Concepts for Regression and Classification. So there was something for every interest and level of expertise of attendees.

I had a chance to meet quite a few amazing GIS professionals from NGA and spoke with them about their roles and how much of GIS they used in their day to day work plans and most said they used it extensively. I also met some folks from advocacy organizations that use GIS in the work they do. I met LeeAnn King, a Geospatial Manager with  the  Chesapeake Conservancy and she shared with me some exciting field methods that mirrored some of the methods I use in my GIS investigations of the Great Dismal Swamp. I also met Allison Davis-Holland who works as a GIS Consultant for Self-Represented Litigation Network.  Exploring both these orgs helped me to see just how wide the impact GIS has not only on industries of surveillance, capital, and government operations, but also for environmental justice and legal advocacy.

Overall I was impressed by the culture of ESRI which was a flexible one. One where staff believed in excellence, but knew that goals they endeavored to achieve could be realized from a variety of paths.