Upon visiting the site I am impressed by its design. It is not cluttered or busy and the layout lends itself to the subject at hand in a manner that signals the gravity of the content contained. A difficult balance for projects dealing with traumatic records. Very nicely done.

Load time was fine- Registration very painless. Upon completing profile I was instantly drawn into the opportunities to transcribe. I began by working with ads already done to see and familiarize myself with the fields of metadata that contributors are expected to provide based off reading the ads.

I then turned to working with the ads yet to be transcribed. I did three.

Navigation provided a steady ease of use. I especially liked how the publication date range was the default calendar when prompted to provide abscond date. This allows contributors to not have to populate the calendars manually. The contributor can then input the actual date based on interpretative clues provided in the content of the ad.

Site navigation is functional and intuitive which aids in a positive user experience as well. This will influence a favorable completion rate. Because of the intuitive progression of data-prompts users are not fatigued by clutter or seemingly extraneous details that can bog down processes.

Because I am used to transcribing(as most historical geographers are) I am not so sure that my performance can be considered a “standard” measure of readability of ads, but I can say that once images are zoomed in/expanded, contributors may have greater opportunity for image interpretation/comprehension. The fact that this is print material and not handwritten is a godsend since there is now a generation of students not trained in reading cursive sadly.

I was struck by the difference in “rhetorical diction” of the South Carolina ads as compared with what I have seen in Great Dismal Swamp adjacent areas. The word pairings that I see for northeastern NC runaway ads are quite distinct from the ones I observed on Freedom on the Move from the Charleston area.

What this revealed was how landscape, place, the built environment and existing structures of confinement influence what enslavers say within the ads. For instance the existence of the workhouse in Charleston meant that some of those ads allowed that as a site of “delivery” for enslaved fugitives. 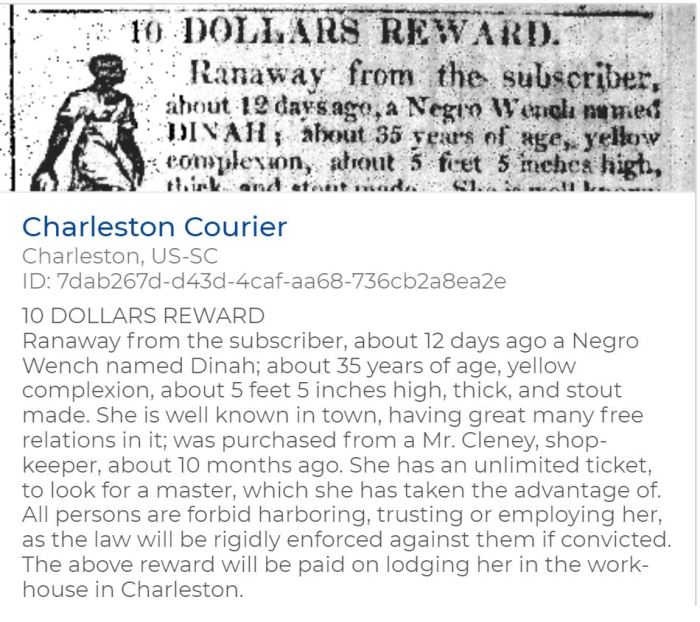 I also saw something I had not yet encountered-a delineation of reward based on a person’s race: 50 dollars if brought by a white person, 30 if by a person of color and 10 by master of workhouse.

It may also be the case that subscribers who do not identify themselves in the ad but mention that an enslaved fugitive “has a ticket to find a master” and ask that enslaved fugitives with that status be brought to the workhouse may be agents for the workhouse. I have not encountered this phrasing before, but my gut tells me that such “tickets” may indicate that an enslaved person is in a status that historically would have been seen as “unclaimed” or, the previous enslaver may have died and there are no heirs to assume ownership of the enslaved person. Until I find more details about this kind of status I cannot be entirely sure of what these “tickets” mean. This of course created a difficulty in naming the enslaver for that particular ad. What the system did was ask for more information when that happened. I found that an impressive intervention in circumstances where more information is requested because enslaver names are not provided with such ads.

Another thing I found. For George Denton it was said that he “deserted” a ship in Charleston on the vessel referred as Brandt. I am thinking that perhaps this was a free waterman who was subject to the laws and dictates of the captain of the vessel. I also believe he was free because he is listed with a last name. For these sort of ads regarding ship deserters who are also African-descended this is kind of an “anomaly” of sorts when put with the scores of enslaved runaways. Nonetheless, his personhood was still seen as “bound” but to the ship(See Michael Schoeppner. “Peculiar Quarantines: The Seamen Acts and Regulatory Authority in the Antebellum South.” Law and History Review 31, no. 3 (2013): 559-86. http://www.jstor.org/stable/23489503. for more on the constrained mobility of African-descended seamen in antebellum southern port cities). 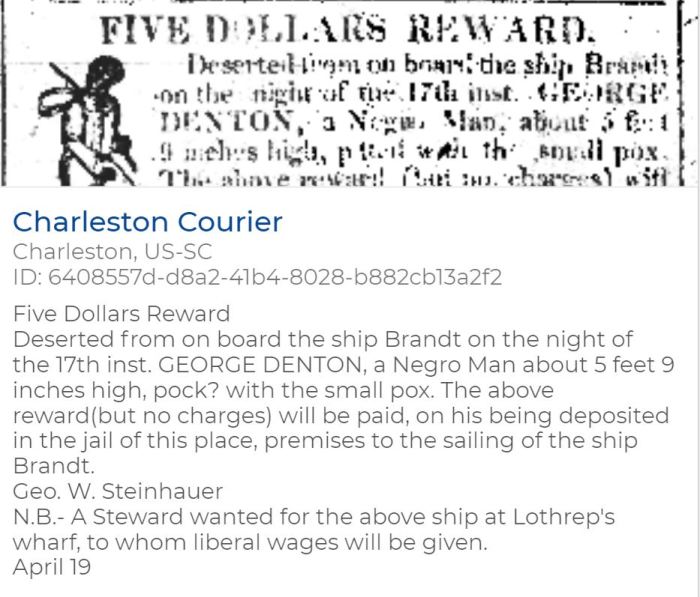 Finally I can see that based on the fields of data prompts for contributor input, a highly detailed knowledge base can be created for further information extraction of these features from the enslaved runaway ads. Once this is compiled (and I recall Ed Baptist mentioning that Cornell programmers were thinking of a graphical resource description framework) the features within the ads will show the interconnectedness of several dimensions(be it ideological, spatial, economic) of structures that reveal the architecture of slavery.

Freedom on the Move builds database of fugitive slave ads by Linda Glaser-https://news.cornell.edu/stories/2019/02/freedom-move-builds-database-fugitive-slave-ads

Rediscovering the lives of the enslaved people who freed themselves by Ed Baptist, Vanessa Holden, and Hasan Jeffries-https://www.washingtonpost.com/outlook/2019/02/20/rediscovering-lives-enslaved-people-who-freed-themselves/